Check out Lina Augaitis‘ recap of this past weekend’s Oceanman and Stand Up Paddleboard Races, which took place at Jericho Sailing Centre in Kitsilano.

Thanks for sending Lina, and nice work!

Well,
I think my body deserves a big pat on the back and a big rest. Good thing I am heading to the cottage for a week for my sisters wedding and just some plain old relaxing cottage fun… I can’t wait to be sun bathing on our wooden row boat sippin on gin and juice and beltching out some old school lithuanian camp tunes!

but first a recap of what its like to finish a tough 6 day adventure race and 6 days later try to push the body to its limits in a more sprint fashion race (x2). 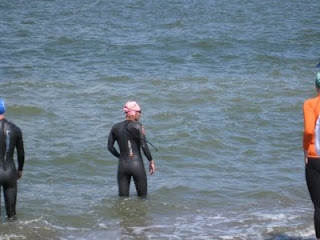 I can’t believe I managed to miss this event for so many years. Gary Parsons puts on one fun filled event. It all happens around Jericho sailing club and pushes the limits of a different kind of athlete… maybe more like the fish in us….

The race was a 1km swim, 5km kayak, 6km run and 2km stand up paddleboard.

I am not a horrible swimmer and I used to race triathlons, so although I don’t enjoy swim starts I am no novice to open water/mass swim starts but on this particular day you wouldnt have known, and neither would I. I definitely knew my body was run down and hadn’t fully recovered from my adventure race but I was trying to think positive and was super excited to get to be part of this race and experience it solo style. I knew a bunch of people racing, people in the crowds and Johnny was helping me out with support. I didn’t want to disappoint anyone, including myself. 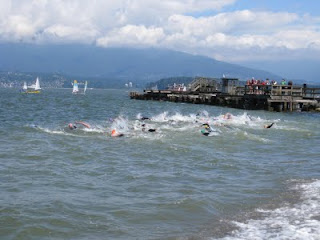 On the start line, the waves were big, choppy, and coming from every direction. The big yellow triangle bouys were moving all over the place. Gary yelled go and we were off, I tried to stay calm and just breathe nice and slowly. I started on the edge of the crowd, pretty happy with my choice, and then it all went downhill… I was hyperventilating, coughing, panicking, and then…..breaststroking (i never breaststroke, especially in a race).  I was trying to do everything in my power to calm myself down, think positively, and get through the 2 loop swim course. About half way through the first loop after lots and lots of people passed me I definitely was planning my escape route. I didn’t think my body was recovered and able to complete the race. I was hooped. I eventually made it to the beach after the first lap, flipped up my goggles, WALKED (also a never for me in a race) around the marker on the beach and as I was deciding how to end my suffering, I saw Andrea standing on the edge of the beach, yelling GO LINA! At that moment I knew I was getting back in the water for the second lap. THANK YOU for being there Andrea, I am so glad I didn’t quit. So I managed to just get through the swim, in last place of solo women. It was a little embarrassing and tough getting out of the water and running down the log to the kayak but when I saw all the support I had I started getting fired up again. I wasn’t too far behind the others. 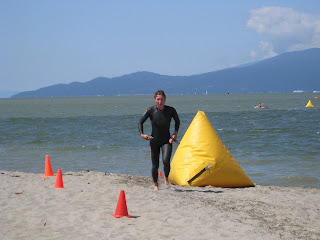 The water was still mighty choppy on the kayak. I put on my tweaker Ryders sunglasses and jumped onto my surfski. I was paddling the Fenn XT surfski (thanks Stu). I actually felt super stable and ready to tackle the cross chop and whatever else the waters had in store for me. I managed to pass one girl and a bunch of other boats on the paddle. Feeling much better.

Off the kayak Jen D helped me clean my feet and I put on my running shoes and off I was on the run. I wasn’t feeling too bad, but obviously not my strongest. I just kept a good steady pace on the run. The run took us around Jericho Park. It was a really fun there and back course, all on trails! I managed to again pass some folk on the run. I was telling myself throughout the run to just keep a good pace and that SUP was next and that was my thing…. no worries!

By the time it was time for the SUP the waters calmed down a bit (which I was pretty happy about as I was on my 23.5 inch wide Starboard New). I felt totally stable and got to punch through the SUP section. I almost had a major screw up missing a buoy but Dale caught me just in time to let me know. I turned around and still managed to re catch the guys who passed me while I fixed my mistake.

I managed to come in 3rd for the solo female category but most importantly,…… I didn’t quit and finished. I am proud of me and my mind!

Following the race there was a delicious salmon bbq, with beers, and pie, and lots of draw prizes! 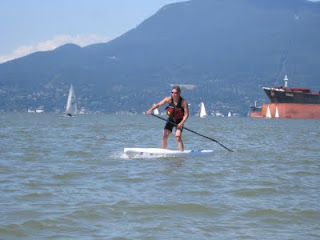 Pretty tired and sore from the previous day of racing the Oceanman, I lazily got on my bike and made the 45min ride back to Jericho sailing club. Again the wind was up and the waters ultra choppy. I was tired but also excited as I love racing on the SUP. I managed to get on a 25inch Starboard New, which for me was perfect. The 23.5inch was just a little too unstable for the conditions and that extra 1.5inches gave me the confidence and stability I needed.

The first race was a 4km course. At first all of us endurance junkies were annoyed by the shortness of the long course. With the chop and headwinds and side chop….. it felt a lot longer and ended up being a really fun length… Good call Gary! I can never get a really good start on the SUP (I need to work on this) but I managed to get a better start than most. I stayed upright on my board. The start of the race was tough, really tough…. the waves were coming in sideways, and all over really and they were big… Rounding the first bouy Shannon was right on my tail… I just kept concentrating on the water and what I needed to do though, as I was still on a pretty tippy board and one moment of loss of concetration would mean I would be in the water… The head wind heading out to the far bouy was tough. You really needed to power through each stroke (totally what I love). Coming in from the far bouy it was a fun downwinder and I was trying to experiment with riding some waves. I haven’t had much chance to practice downwinders but would like too… they was fun! I came in as the 2nd 12’6 rider and the 1st female overall! I was pleased. 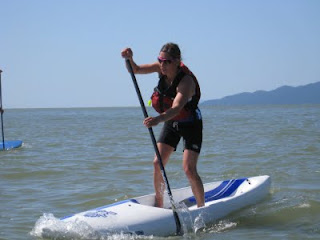 Mike D, Kimo, and I were a team for the relay. The relay was a 1km course that we each did. Mike started us off. He was in a tight battle with Gary P. They were both on the 14 foot Ace. Mike came in about 5 seconds before Gary and then it was my turn. I was head to head with Shannon. About a minute into the paddle I fell off. I am not sure exactly what happened but it caught me totally off guard. Funny enough I was telling friends that I never fall off in a race… hahaha…. Anyways, I got myself back on the board but Shannon pulled ahead during my faff. I managed to sort of catch her on the first turn and then caught some little waves before heading out on the second loop of the 1km course. Again, going out in the headwind is kind of my thing, and managed to pull ahead and stay ahead on the downwind section. Next up was Kimo. He was battling it out with Kelvin on the other team. They both battle different kinds of boards and so had some trouble staying up right. This caused some excitement for the relay race. In the end Kimo pulled through and managed to have one less slip into the water than Kelvin. 1st place in the relay race.

This was a mighty fun gongshow. We were all on the surf style boards (12 foot and under). It was an all out mass sprint to a bouy about 25meters away and then back. Mike D caused some chaos by going the other way around the buoy and Kelvin managed to squeeze through for the win. 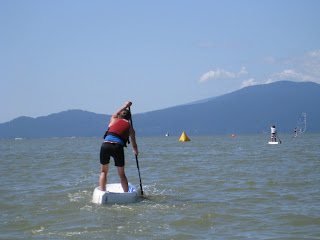 Again, another fun day of racing. I love racing but am totally excited to take a break and relax at the cottage.