Stand Up Paddleboarding is my new little passion. I discovered it fall 2008 at Santa Claus beach, a beach just south of Santa Barabara CA. Andrew and I were on our first road trip down the west coast famous highway 101. We were chillin with my teammate Daniel from Yogaslackers and met up with some camp staff I used to work with in MN. They introduced SUPin’ to us and I loved it. Andrew’s first experience involved paddling side by side with a dolphin, which is pretty awesome in itself. I was on my way to a 6 month trip to South America which involved moutain biking, racing and hiking and soon forgot about this neat little sport I tried until I returned to Vancouver and saw that Deep Cove Canoe and Kayaks had started renting some SUP boards. I went out a couple of times and knew this was something I would be involved with. It was a combination of many of my passions (balance from slacklining, full body fitness, and the outdoors)… I needed to know more…. The summer came and left and well so did the winter and school and skiing and lots and lots of great things….

In April Andrew and I flew to Baja Mexico for a 6 day kayak trip and had a couple of extra days to spare. We found a kiteboarders heaven: La Ventana Beach. It was off season for kiting but perfect for SUPin’ and so we did just that and explored some SUPin’ there again… We saw fish from a new height and enjoyed the exercise and relaxation on the boards. Needless to say I was still intrigued by this new sport.

Spring rolled around and I began working part time at Deep Cove Canoe and Kayaks. I realized that I was spending my breaks and time before and after work on the SUP. I decided to race the Indian Arm race on the SUP… It was tough, it was long but it was my kind of race… I found out about this race in Vernon called the Kalavida Classic.. It would be my first real SUP event/race. Andrew, Kala, and I headed over with a board and some mountain bikes. I won both races, I felt great and I loved it. I was onto something.

Deep Cove started a SUP category on their weekly Tuesday Night races. At first this was tough for me because I also love surf skiing and loved using the Tuesday night races as my surf ski training but I was becoming more and more involved with SUPin’ and began showing stronger and stronger feelings towards using these races as training for future SUP races.

I traveled the weekend before my wedding to Ucluelet to participate in the Island SUP race series. I had an awesome race coming in 4th overall (regardless of boat class). My presence in the scene in BC was growing and I was finding quick success and passion for this new sport.

I was away on my amazing honeymoon for the two big races in WA state and wasn’t feeling organized enough to head to California to race in the biggest SUP race event of the year, The Battle of the Paddle. I was disappointed but determined to make it happen for the following year. To my surprise Bob from Deep Cove Canoe and Kayaks and Assistant Director Mike were heading down and were happy to help me out. I booked my plane a day before I left and I quickly found myself learning to stand up paddlesurf on Dana Point Beach.

I was negotiating the elite race all day/night and the morning of. I decided that in life taking healthy risks usually leads to some kind of growth/learning experience. I would only learn and excel as a paddler if I paddled with the best. So I found myself on the start line with 25 other elite ladies and about 120 elite men. 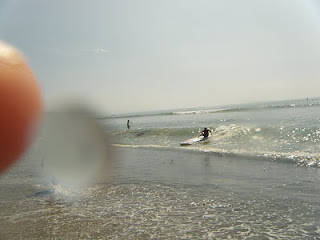 The course was a W loop course where surfing skills, turning skills, endurance, power and a little bit of luck were all essential to come out on top. I luckily acquired some of these essential skills but confidence and practice in the surf was going to be the difficult portion of the race for me. I had surfed before (not the standing up kind with a paddle) but sparingly, maybe once or twice a year depending on where I was traveling too. The gun went off and onto the board I climbed. I believe I fell off somewhere heading through the surf right off the start, most likely from nerves and being too stiff, so I forced myself to relax and stay calm and just try my best with the skills and knowledge I had thus far. Starboard helped me out with boards, for this race I was on a Free Race 12’6 x 31′ Custom board. My thought with taking the slower and wider board versus the more race specific board was to sacrifice my flat water speed by being on a wider board (most elite racers were on 25′ or so boards) in hope to stay upright more often in the surf. Well, I had good moments and bad moments… I was lucky at points: where we had to turn in breaking waves the majority of the time I missed the set but I also happen to be unlucky at times or just falter in the surf from inexperience. 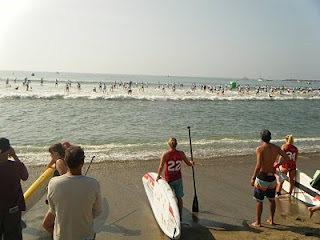 I had moments where I wished I had entered the age groups and I had moments of great accomplishments and feeling proud to have taken up the challenge of the elite course. My result wasn’t stellar but at least I have time and motivation to work towards improvement. Now, looking back I feel nothing but the feeling of success. I was the only Canadian on that start line, i gave it my all and I started racing and truly paddling 5 months ago. I am stoked.

I spent the rest of the afternoon checking out the expo, talking to reps, sponsors, athletes, etc. It was great to share stories, hear stories, and relax. We spent the night with the Starboard crew. Sunday turned out to be a relatively big day! lots of good time spent on the board. I entered the distance race. I raced on the 14ft Starboard race board. I had never been on the board which I suppose isn’t the best strategy for a big race but I felt lucky to just be there and have a board to stand on. The race included a mass start on the water with 180 paddlers… a little crazy but I made it through noentheless. I was feeling pretty good through the first third but was quickly noticing that I was using tons of effort and wasn’t feeling the ease through the water that I naturally do? I pushed hard though through entire race, a little frustrated at not feeling the flow but enjoying the battle of the long course. This is definitely my strength and oddly enough what I absolutely love, just hammering for as long as I possibly can… it’s just me against my own strength and determination. I was pleased with my 1:29 time for a 10 miler.. but unlucky for me I was in a tough category… next time….. though watch out folks… I am on a mission. 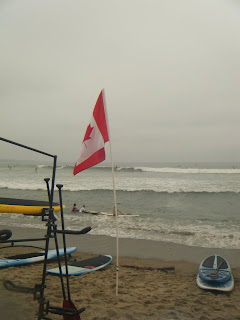 I think the highlight of this amazing weekend was taking part in our team Canada relay competition. Kelvin, Norm, Bodie and I rounded out the team. The race consisted of paddling out the surf around 2 bouys back through the surf, onto the beach run 75ft tag your teammate and repeat through whole team twice. We were on the Surftech Bark 12’6, which is a great all around board! My first lap was going great until a board came flying into my head and knocked me off my board (a popular occurrence when you have 200 paddlers going in and out of surf, some with leashes and some without…). luckily I was fine and climbed back on my board to finish off my round…. The atmosphere, the excitement and the teamwork made the experience an unforgetable one. There has got to be something to be said about teammates and working as a team, it is something you just don’t get in solo races… It is something I miss a ton from Adventure Racing. The comaderie brings people closer in a way that is hard to match. After our interview for the live webcast and coming off our high, it was all over and time to take down, say goodbye to folks and try and enjoy the last couple of hours in california.

The battle of the paddle is quite the event, it’s huge, it’s loud, and it’s inspiring. The vibe is all about Stand Up and its quite the experience to have hundreds of people so into the same thing.

I have to say I am even more hooked than I was before, and even more keen to teach, to motivate, to give others this opportunity to enjoy this awesome new sport.