Thanks kindly to Bob Putnam at Deep Cove Kayak for his insightful look into the 2010 Battle of the Paddle, Doheny!

Too much fun? If there can be too much fun, my recent trip to California for the Battle of the Paddle (BOP) was dangerously close.

It was a full weekend of hanging out in a cool location, with nice people and all the SUP toys you can imagine. The grand scheme was to make this a weekend of experiencing the SUP culture and industry first hand. Gain skills and knowledge so Deep Cove Outdoors, and DC Canoe & Kayak Centre can be on the cutting edge of SUP stuff. It was also a test of physical stamina and endurance on several different levels. Jam as much activity into one weekend as possible. Late nights, early mornings, schmoozing, surfing, racing and info intake. 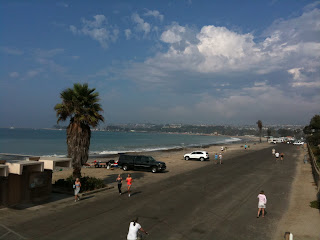 I traveled with the instructional team from Deep Cove Canoe & Kayak Centre to Dana Point, CA. Mike Darbyshire and Lina Augaitus. We arrange our flights to maximize the weekend. A 6:30 am departure on Friday (that means getting up at 3:30) and a 9 pm return flight on Sunday. Monday morning was rough!

I have never been south of San Francisco, so I was pretty excited. Dana Point is south of Laguna Beach. We left Interstate 405, and took “Beaches Boulevard” to Huntington Beach. All the big name beaches I had heard of all my life were there. Newport, Laguna, Long, just to name a few. Palm trees and strip malls. 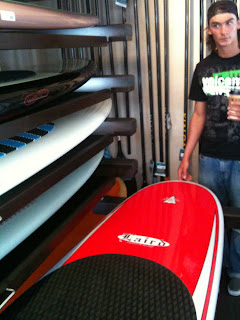 We stopped at “Stand Up Paddle Company” in Laguna Beach. It was definitely “Up Scale”. Being a retailer I was ogling some of their roll out display rack that must have been worth a small fortune. 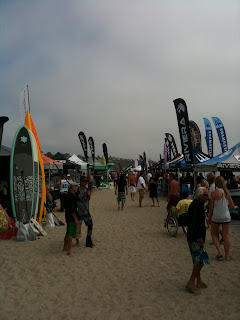 The BOP is more than just a race. It is a gathering of the SUP industry to promote their products and services. Set up on the beach the SUP Circus occupied 500 metres of shoreline. Side by side, 10 x 10 tents promoting every imaginable product that could be related to SUP sport. Jewelry, clothing, storage systems, sun screen, sun glasses, fitness programs, instruction and boards, boards, boards and all the big name paddlers you could possibly squeeze into an area that small. Big names that I didn’t even know were big names, and boy do they ever make a big deal of the big names. I could have been standing next to Joe Bark and I wouldn’t have even known it. Muscle man SUP paddler, Chuck Patterson could have kicked sand in my face and I wouldn’t have even appreciated it. I was pretty naive…..still am!

One huge benefit of this event, is that you can test pretty much any type of SUP board you want. A word of advice, bring your paddle and bring your leash as these were in short supply. On Friday the manufactures were still setting up and the only board I could get my hands on was a 12′ Riviera with no-leash. After trying to get my surfing style going, (read no style) I finally had a major wipe out and lost the board. Fortunately the board made it to short in quick order and I swam in like a goober as some 10 year old beach kid rescued the board from damage. Luckily nobody seemed too concerned. Note to self: must find leash. Waves were 2 – 4 feet. It was pretty good for a novice.

Friday Night: party at one of the original Hobie Stores, free beer and burgers, live music and I might have rubbed shoulders with big name SUPers. Tanned big dudes, with big smiles and big laughs. I had a great chat with Jake the owner of the Hobie store. Nice guy and very forthcoming with advice. 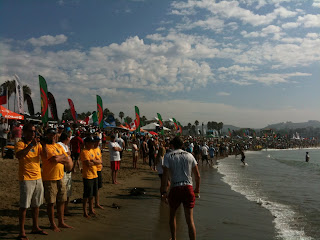 Saturday was race day, Lina had bravely signed up for the Elite race. A very challenging course that ran in and out of the surf zone. One of the 180 degree turn marks had 4 foot waves regularly breaking in front of it. Imagine approaching a 180 turn and a wave picks you and your surfing past the mark, now add 10 of your dearest and closest competitors on the same wave. Yes, it was carnage! Lina had a brave face but you could see her questioning her judgement prior to the race start. Although she is very fit and she can grind away for hours at most activities, this course required a high level of technical surfing skills, most of which she is still trying to acquire. She toughed it out and we were proud of her effort. 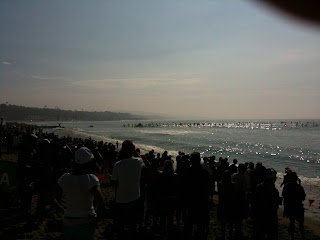 Mike and I signed up for the Open race. A much less challenging course, once out through the surf, followed by 5 laps of a square course and then back through the surf. Piece of cake, eh? My training had been minimal, and any delusions of success I had prior to the race were mere fantasies as I was soon to learn. Fun? Yep for sure! Mike had a great race placing 3rd in the 19 – 29 category and Deep Cove SUPer Kelvin Humenny also got a 3rd in 40 – 50 surf category. Well done boys!

After that I was feeling pretty done. The gas tank was near empty and I loafed around the beach and entertained thoughts of heading back to the hotel for a snooze. But after a couple hours of hanging out on the beach the lure of surfing dragged me back out.

My body was starting to fail me, new surfing and SUP muscles were making their presence known. This late afternoon surf session was the highlight of my weekend. I was paddling a Starboard Whopper 10’6″ x 34″ in TAC (that’s the wood veneer) What a great looking and fun surfing board it is. The crowds were waning, there was a reggae band on the beach and the sun was low in the sky, it was pretty good! On one surf into the beach, Declan from Starboard asked me to tell the other guys to come in as it was time to pack up. Ken, Declan’s business partner, was out surfing too and when I relayed the message his was repsonse was, “Tell him to get his ass out here”…or something to that effect. It wasn’t long before Declan was out on the water, and we surfed for another hour. 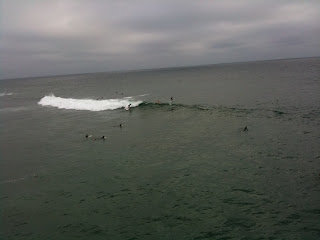 A late night at the Double Tree lounge, an early morning getting Lina to the distance race. I was a hurting unit and all day to surf. I had to visit Bodie Shandro from Surftech. Deep Cove Outdoors will be carrying the SurfTech Brand for 2011, so I had to check out their boards. Its work I tell ya! Laird Hamilton surfers, Joe Bark race boards. They are all awesome. Bodie, Lina, Kelvin and Norm Hann made up Team Canada for the relay race. They all seemed to have great fun in the relay.

On the way home on Mike’s suggestion we stopped and Huntington Beach and watched the surfers from the famous pier. It was the end to a great weekend.
I have to admit I’m hooked on SUP!
Bob

Thanks again for your report Bob, and you can check out deepcovecanoeandkayak.blogspot.com for more information about Deep Cove Kayak and everything else SUP related going on down in the Cove!