A week has passed since I arrived home from the Battle of the Paddle Hawaii and I am beginning to think that I am on a permanent “Aloha” high! It was the Battle of the Paddle last October that prompted the paradigm shift in my life. I went down to SoCal as a an age group competitor, a weekend warrior that fell in love with SUP the moment I was first introduced to it by Colin Kearns from Island Longboards. BOP Doheney changed everything.

Three months later I become the Brand Manager for both Surftech and Kialoa, started an SUP Instruction business, paddlesurfitness.ca, became the first certified Academy of Stand Up Paddleboarding Instructor in Canada, and started a personal training business based on SUP. How much deeper into this amazing sport can I get…..enter BOP Hawaii. How could I possibly pass on the opportunity to compete, Surftech was sponsoring and Waikiki was the birthplace of Stand Up Paddling! I arrived the Monday before the event to meet up with my bro Dane Deboer from SoCal. What a welcome, straight to dinner with Sparky and legendary surfer Joey Cabell at his Charthouse restaurant! 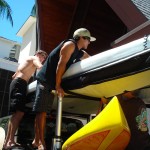 Tuesday morning would see us packing up a dozen boards and departing the beautiful Outrigger on the Beach north to Hawaii Kai for my first down-winder. What a crew, Gerry Lopez, Sparky, Candice Appleby, Ron House….the list of surf legends ended at 13! 25 knot winds, and 10 ft swell made this one of the most exhilarating experiences of my life! 50 meter glides off the huge offshore bumps! My BARK 12’6 Competitor ate it up for the entire 8 mile run. A day not soon forgotten. Gerry and other regulars claimed several times over that “this is as good as it gets”! The next few days proceeding the event were spent resting and learning to “surf” a race board.

Thursday morning I was joined by Chuck Patterson and Colin Mcphillips for a surf session out at “pops” on Waikiki. Needless to say they were both slaying it on the race boards, and making the most of the practice with memories of the importance of “surfing” at last seasons Doheney event.

Perfect tropical weather remained for the entire week that would see us through press conferences, surf sessions and fine dining thanks to our gracious Hawaiian hosts.

Friday was set up day and Fort De Russy Park came alive with vendor tents, stages and all of flare that a prestigious event such as this would bring. The highlight of the day was without question the welcoming party at the Quiksilver Store. An amazing gala event with an endless supply of beautifully presented local delicacies, fine wines, live music!  If you have never eaten “poke” before, this was the finest I have ever been treated too. The list of invite only attendees included all of Hawaii’s surf royalty, competitors and sponsors. We did not want the night to ever end!

Thankfully yet another comfortable sleep on the penthouse floor of the Outrigger ( not sure how that happened) followed as it was game on Saturday morning!  No one could have ever predicted the 600 plus competitors that registered for the weekends events. Even Sparky and Gerry were in awe of what they had created.

The opening ceremony was a fabulous performance of traditional dance that reminded those in attendance of the deep soul in Hawaiian culture. As the day moved on through the Keiki ( kids ) races and the open age group race, a pit began to develop in my stomach as the Ka Heihei Kulani ( elite) race drew near. The wind and swell were both up, the reef that just four hours earlier was dry, now had consistent sets rolling in.

It would be another ‘Le Mans” style beach start with 122 competitors lined up awaiting the gun. My ears were ringing, sweat pouring down my face  in the tropical heat and we were off! For the next 1:42 minutes, my sole focus was “do not fall”!  Three zig zag laps out and in through the surf followed by a run on the beach and back out, repeat and repeat again equaled 6 + miles of hell! As if getting out through the surf wasn’t hard enough, the turn north was straight into a 20 knot headwind, fighting to catch a wave back inside, run and repeat!

At the end of it all, it was quoted by last years winner and 8 time Molokai race champion Jamie Mitchell as the most difficult race of his life. In the end, it was Danny Ching crossing the finish line at 1:22 to take home the $5000 purse. Saturday night = Ibuprofen and sleep, the Ke Ala Kai Loa, Hawaii Kai 10 miler awaited Sunday morning.

Despite the stiffening pain that had settled in following Saturdays event, I felt great, and ready for the 10 miler. Wind were down a bit from the training run but the swell was up. A mile offshore in the wind, chop and swell would have intimidated the hell out of me just a week earlier, however I had listened closely to my mentors 3 days earlier..”watch the tip of your board, when it drops dig hard to get on the wave”…. “don’t fight it if the chop takes away the nose, just ride it out”, words that proved invaluable to me in a great finish of the most grueling event that I have ever undertaken.

The photo of me coming into shore with good bro Ron Bett’s handling the board illustrates the sheer pain that I was in that moments later after the sprint through the sand to the finish line was replaced by jubilation!

Words, regardless of the writer could never describe the feeling that one comes away with after such an amazing event. I will carry memories of BOP HI with me forever. The word that comes to mind most often is the Hawaiian word “Ohana”, meaning family.

I can only imagine that what I was able to experience could be likend to what the surf culture experienced in the early days, when everybody was stoked about this new sport, regardless of what or where you surfed, as long as you surfed! Stand Up Paddling is here to stay for many, many decades to come and I am soooo honored to be a part of it’s rebirth! 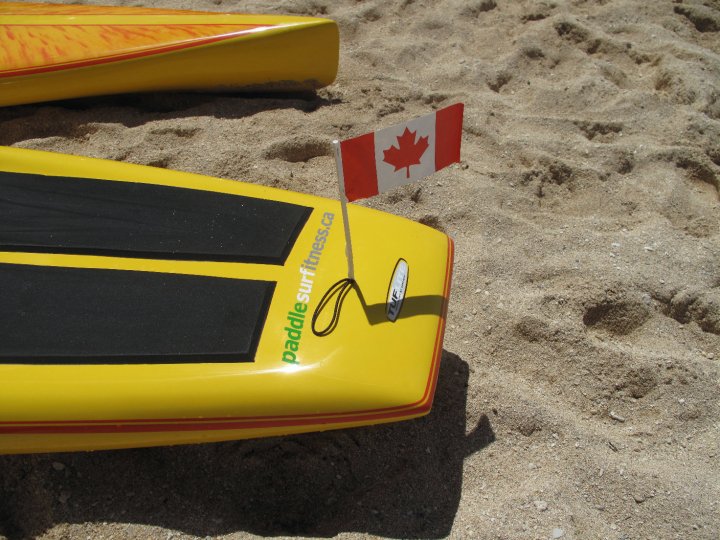